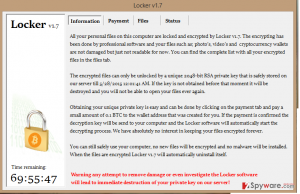 A new strain of ransomware has infected computers, over the past few months.  The infection is thought to be spread through infected sports websites, or through a compromised MineCraft installer.  Based on experts’ opinions, they state that this strain has a large global “installed” base, which means there are one heck of a lot of computers out there all over the world, with this virus installed…

It’s called “Locker”, and sat silently in infected computers, until midnight May 25, 2015.

At that time, it woke from its slumber and reared its ugly head, and wreaked havok in an ugly way.

Bleepingcomputer has a support topic that is 14 pages long, and they received 100s of emails from consultants all over the world.  Similar websites with topics related to this new strain are suddenly posted on all the major support boards, AV forums, etc.

Here’s what “Locker” does: 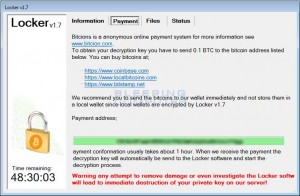 Once the files are encrypted, a Bitcoin ransom is demanded from victims.  Once payment is confirmed, victims are provided with a “private key” in order to retrieve their data.

By Time of Publication:

CyberCriminal has remorse?  Or he’s made so much money already, he’s pulling out of this campaign, or he’s gotten cold feet & is afraid of getting caught by law enforement, or damaged by a local cyber mafia.  Either way, he claims the release was “a mistake”, and has uploaded a CSV file with a dump of the encryption keys.  He states that automatic decryption of all infected computers will start on June 2nd.

CyberCriminal states, “I am the author of the Locker ransomware and I’m very sorry about that has happened.  It was never my intention to release this.  I uploaded the database to mega.co.nz containing “bitcoin address, public key, private key” as CSV.  This is a dump of the complete database and most of the keys weren’t even used.  All distribution of new keys has been stopped.”

This seems very fishy.  If you build code like this, you know exactly what you are doing (and the fact that it was a ‘sleeper’ shows months-long careful planning).  If he was really remorseful, he’d refund everyone’s money (which hasn’t happened). So far, it’s not clear if current infection vectors (infected websites/ads etc) have been turned off yet.

We can assume that this CyberCriminal wanna-be, is exactly that.  He’s a talented coder that sees all these other ransomware viruses/malware being very lucrative, and wants some of that money action.  However, he’s not yet experienced, because a “mix-up” like this would not happen with a professional CyberCrime gang.

If you have infected computers, there is a chance you can find the decryption key in this database:

This file does not seem to be malicious, based on a brief virustotal analysis.  It does contain a large quantity of RSA keys and Bitcoin addresses.  OPEN AT YOUR OWN RISK, until further analyses are completed.

TbyD will keep you posted, as more information is released.