which includes 25 non-repeating letters, both upper and lower case,

with at least 5 special characters,

and the middle 6 letters from the 5th elfish tune in Lord of the Rings,

…at least I know that my information and data are secure.

However, not all technology requires such an unguessable password.  And technology users everywhere are still taking full advantage of that fact, and relying on some nauseatingly easy (and common!) passwords. 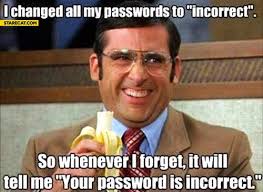 Security applications and services company SplashData released its annual list of the previous year’s worst passwords.  Apparently, some of us aren’t learning our lesson from the hacks of others, as the 2015 edition bears a striking resemblance to the 2014 version.

Morgain Slain, CEO of SplashData states, “we have seen an effort by many people to be more secure by adding characters to passwords, but if these longer passwords are based on simple patterns they will put you in just as much risk of having your identity stolen by hackers…As we see on the list, using common sports and pop culture terms is also a bad idea.  We hope that with more publicity about how risky it is to use weak passwords, more people will take steps to strengthen their passwords and, more importantly, use different passwords for different websites.”

Check out our “Email Red Flags”  for what to watch for in suspicious emails.